Short Notes on the Ways of Seeing the Ethnographic Object

Short Notes on the Ways of Seeing the Ethnographic Object

Perhaps not everyone knows that there is a museum in Italy that is entirely dedicated to the ways of seeing the world: the Museo degli Sguardi (Museum of Glances) in Rimini.

Based on Delfino Dinz Rialto and some other collectors’ legacies, the museum is an attempt to mix both a correct scientific discourse and heterogeneous heritage into an harmonious display, with artefacts coming from various countries in Africa, Melanesia, Polynesia, and South America and from different periods in time. In 2003, Rimini established a committee of scholars chaired by Marc Augé, which decided to reverse the perspective of and on the museum: the other cultures would not be represented through the objects they had produced, but through the Western glance on these objects – hence the name Museum of Glances.

The collection is accessed by passing through a room where an opaque display case conceals certain objects (a metaphor of the inability to distinguish as well as the conflict and difficulty of encountering the other). Its basic structure is divided into four sections –
the marvellous glance (that of the first encounter between the West and ‘other’ cultures, characterised at the same time by enchantment, amazement, admiration, repulsion, horror, etc.),
the scientific glance (which accounts for the birth of the concept of museums and scientific classifications since the eighteenth century),
the glance of the collector (the individual who travels by curiosity and collects objects according to his/her geographical, cultural, historical or thematic preferences),
the glance of the aesthete (artists from the late nineteenth and early twentieth century address works produced in non-European cultures, perceived as a pure expression of the human being) –
where the artefacts, even if originating from different geographical contexts, are sometimes combined in the same room because they are instrumental to the discourse on a specific glance.

I am talking about the Museum of Glances because “The Making of a Point of View. Spotlights on the Indonesian and Malaysian collections”, curated by Loretta Paderni and Rosa Anna Di Lella at the Museum of Civilizations in Rome, could have well matched the theory on the perception of the ethnographic object, as illustrated at the museum in Rimini.

Created within the framework of the SWICH European project and taking place in early 2018, the exhibition consisted of four installations housed in the Hall of Sciences – the ideal location for such a setting: a bright, rectangular area and the room is, in fact, paved with a marble inlay dedicated to the scientific disciplines made by Mario Tozzi in 1943, which fortuitously represents the positivist as well as the classification as the foundation of the museum’s ethnographic collection (those that “The Making of a Point of View”, staging other exhibition strategies, aimed to subvert).

Willing to write a few words about the ‘point of view’ – key-issue of the exhibition – my description and thoughts take for granted that the visitor’s gaze is present in all installations, and each one is also built in reference to it. But what other points of view are brought into play from time to time? What do they want to communicate with the final proposals and how do they do it?

“Objects in Dialogue: Narrations” presented the traveller-scholar Elio Modigliani, who in 1886 explored Indonesia, recounting his experience in the book Un viaggio a Nias (1890). The installation consisted of a large table hosting small showcases with objects; next to it are notes, letters, written records, and photographs to represent the ‘working table’ of the museum curator himself.

Here the gazes and visions are those of a late-nineteenth-century traveller and those of the anthropological curators of the exhibition more than a century later. Filings, maps, contracts, photographs, measurements, classifications, and ethnographic objects are the heterogeneous materials that anthropologists generally collect, classify, select, and compare according to the scientific process by which they construct their own knowledge, aiming to elaborate hypotheses on the functioning of the human being in general.

However, their working table not only accounts for the ’construction of knowledge’, but also for the constructed nature (and the process of such construction) of that knowledge ‘restitution’ (i.e., the installations and the exhibition itself) as an assemblage of selected elements.

“Objects in Diaspora: Reconnections” consisted of six complete structures composed by a wooden cube that housed the artefact in a case + the image of the young person related to it + textual information on the object + a tablet with video interviews and other materials. Each structure returned an object and the point of view on it with one of the six Indonesian students who, after visiting the museum storage, selected some pieces from their area of ​​origin to then retell their related personal experiences. From here, the narration opens to the voices of other members of the Indonesian community in Rome with video interviews and both textual and visual presentations.

“Objects in the Diaspora: reconnections”, therefore, presents another gaze, that of the descendants (at least virtually) of the populations among whom information and objects have been collected. The speech begins with the personal stories of the individual that might range from more intimate discourses to more descriptive ones, characterized by different levels of competence, so that sometimes the lack of information had to be filled with the words of more experienced people.

Still, the final effect is that of daily conversations, like those we might have outside the museum with people like us every day (individuals who are from a cultural origin without being specialists of it) plus more ‘culturally competent’ ones, but always within our reach, so that in this case the objective – i.e., the intercultural, horizontal transmission of knowledge on a culture – is fully achieved.

Going on with the review, I found the other two installations less powerful. “Objects in Transit: Transformations” presented the work of CivicoZero (a cooperative that deals with migrant teenagers at risk of social marginality) Photographic Laboratory’s students, coordinated by Yves Legal, Andrea Alessandrini, and Mohamed Keita. Here the re-elaboration of the object is of artistic nature: the selected ethnographic artefacts (weapons) become instruments of intercultural dialogue through the means of photography and collages by which the students return their experience of the city.

Eventually, “Origin of the detail” was an artistic intervention by H.H. Lim, the result of a residence at the museum in 2016-2017. H.H. Lim took into consideration weapons and other objects of defence, and installed them in showcases whose base was made up of a solid wooden slab covered with lime and engraved with meaningless Italian phrases (vague questions about colours).

The message Lim wants to communicate is that of the inner conflict lived by the artist during his research process, yet a verbal explanation is needed for understanding, and the representation raises the question whether the issue could have been developed with any object of any ethnographic (and even non-ethnographic) collection. Moreover, another question makes its way into my mind for the umpteenth time (i.e., for the umpteenth time I see artists reworking ethnographic artefacts): to what extent is it legitimate to use ethnographic artefacts in an exhibition that suppresses all their plural meanings, stories, and values in order to reduce them to a mere tool to visualise a curator/artist personal/subjective/inner issue, not related in any ways to the artefacts taken into account/use and the people behind them?

Discussing this last question would bring the reflection a long way, and would need to acknowledge case-studies that go from exhibitions such as “Neopreistoria. 100 verbs” by Branzi and Hara, in which many archaeological and ethnographic artefacts were emptied of their contextualisation in order to stage a personal vision completely detached from reality, to those of researches, such as Susan Hiller’s that are not unlike today’s anthropological practices.

Yet, it seems urgent, in a historical period in which the cultural heritage of the world is staged according to the most disparate solutions and enjoyed by an increasingly consistent and varied public, that those who are the ‘writers’ of these new narratives do this, and share with the visitors, from time to time, pieces from their conversations, as in this case of “The Making of a Point of View”.

Only in this way can objects reveal their full potential as “mediators” of knowledge and dialogues, and anthropological museums definitively transform themselves into (necessary) centres of encounter between cultures, in/for increasingly multicultural contemporary societies.

Cristina Balma-Tivola is a freelance cultural anthropologist and art practitioner.
Her works and writings may be accessed at www.cristinabalmativola.it 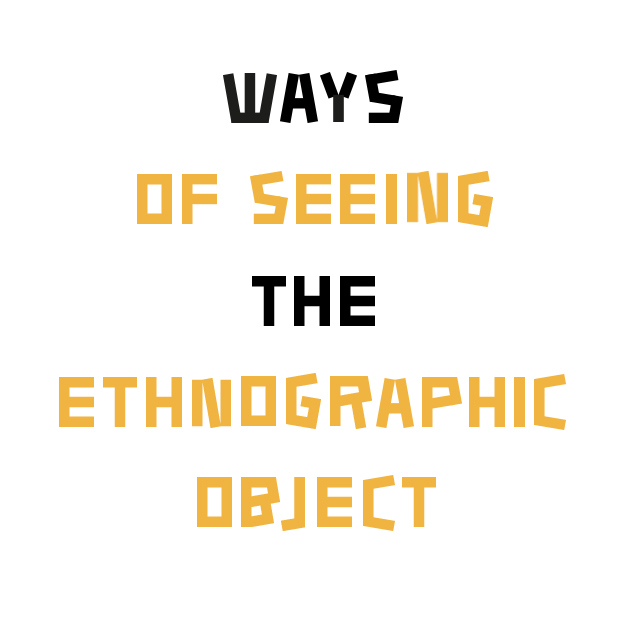